Customer Service is about the customer, not you

As many of you, last night I was laying on my couch watching the latest Mad Men episode when suddenly it happened again, in the last 10 minutes of the show my TV screen goes blank. Same thing that happened last week. I’ve missed again the end of the episode. I was really pissed. So I did what everybody in the same situation would do, went to vent on twitter. 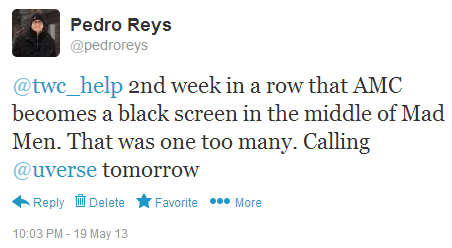 As I expected, I got the usual “we are really sorry bla bla bla. Please DM info so we can contact you.” response back. Meanwhile, I was curious and checked Time Warner’s mentions, as I didn’t believe this was an isolated issue. And I was right: 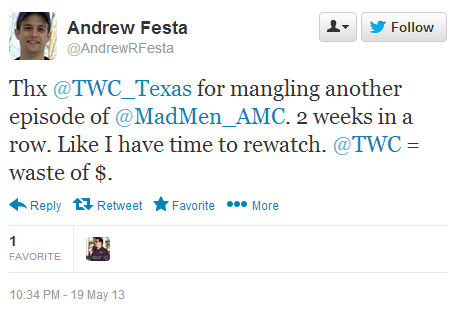 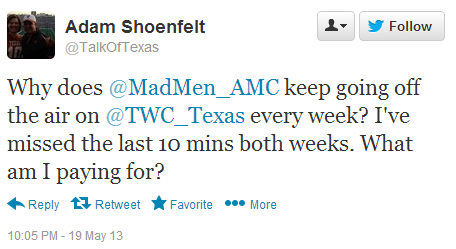 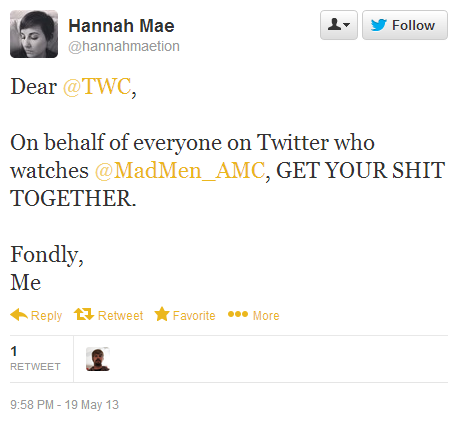 This is clearly not an isolated issue. And it doesn’t take much to realize that there is a high incidence of users from Austin complaining. Is it because people here in Austin like to complain more on twitter (a totally valid hypothesis), or is it because it’s an issue in the area? If I was the one diagnosing the issue, I would try the latter first.

It’s your job, not your customer’s job, to fix your mess

Fast forward to the next morning, I am driving to work when my phone rings. It’s a Time Warner Customer Service representative. She goes on “I’m sorry bla bla bla” then she asked me if the problem ocurred with this channel only to which my answer was: “I don’t know. I know I was watching AMC and this happened”. That’s when things derailed: “As everything seems to be working now, sir, there is nothing we can do. What I would recommend is that the next time this happens you call Tech Support instead of using Social Media, so we can try to help you.”. And when I say things derailed it is not because Time Warner is still in 2007 and doesn’t consider Twitter a proper medium for support requests. I say it derailed because that’s when Time Warner started putting on me, their customer, the responsibility of diagnosing their own problems. And, to be fair with that representative, the folks behind TW’s twitter account did the same: 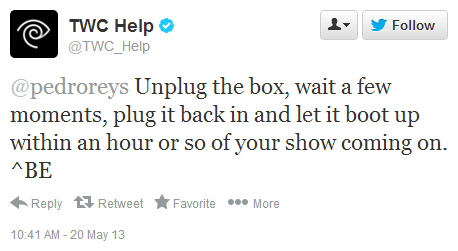 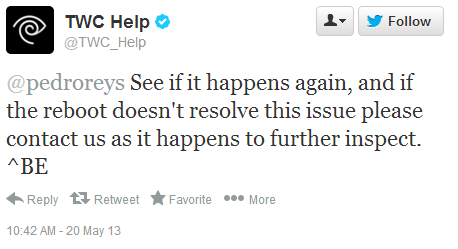 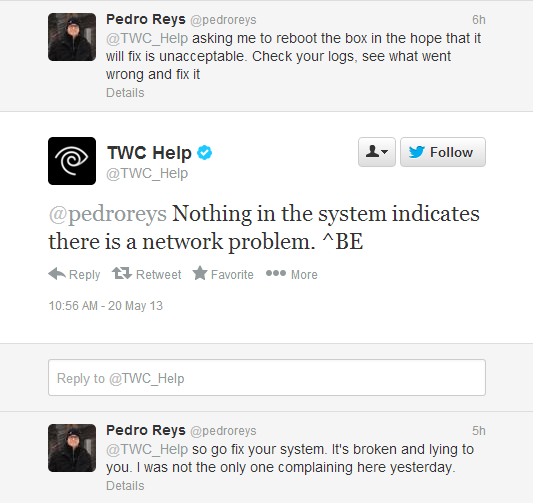 Time Warner can’t track their customers issues. They don’t have the tools to detect or diagnose problems in their own network. Their first reaction is to pull a 1998 tech support script and ask the user to reboot some equipment in the hope that it will fix their issue. This is putting the burden on your customer to solve your problem. Diagnosing what went wrong is your job, not your customers’ job. Heck, your customer shouldn’t even need to tell you that something went wrong, you should be able to detect it even when there is no complaint. It’s 2013 already, for Christ’s sake.

Only after I did their job and told Time Warner to check their twitter mentions around 10PM last night, they realized that this is not an isolated issue that can be fixed rebooting my box. So only then, they decided to let their local network engineers know about the issue. Apparently those engineers can’t be bothered to monitor their network or asked to check it when a customer complains there is a problem. The default protocol seems to be to put the customer in charge of diagnosing the issue and only as a last resort have some engineers look into it.

There is a better way

Here is how I wish this issue was handled:

Customer Service Rep reply on twitter: “That’s really unfortunate, Pedro. I would be really annoyed if I had lost the final moments of my favorite show. Even worse this happened 2 weeks in a row.”

See what happened here, the Customer Service Rep put himself on my shoes. He showed to me that he listened to what I said and was sympathetic to the issue.

Then he could go on: “I will figure out what when wrong so that we can make sure it doesn’t happen in the future. Can you DM us your account # so that I can send you updates on this?”

Now he is telling me what his next steps are going to be and also telling me that he is going to fix the issue.

And now what I hoped the lady that called me in this morning had told me:

Rep: “Hi Pedro, this is Jane from Time Warner. Is this a good time for us to talk about the issue you had during Mad Men last night? This shouldn’t take longer than 10 minutes?”

What did she do here: She made sure this was a good time for us to talk. With that, she acknowledge that calling me was a disruptive action and allows me to decide if I have the time to continue or not. She also told me upfront how long the call could take to help me decide.

Rep: “We understand how bad it is to have a show that you are watching interrupted. It is in our best interest that you are the most satisfied as possible while using our services and we failed doing that last night.”

Here she demonstrate that they care about the issue and they know they have screwed up.

Rep: “As we started investigating the issue, we noticed that this was not an isolated problem, in fact we had few other customers like you sending us messages complaining about the same issue last night. It seems that this is an issue in Austin but we can’t tell for sure at this point. Our Network Engineering team is currently investigating the problem and I will let you know as soon as we have more information about it.”

By saying this, she kept me in the loop and now I feel that they are working to solve the problem.

Rep: “What else can I help you with?”

And finally she give me more opportunity to talk. During this whole fake Customer Service interaction I, as a customer, was put at first priority.

Throughout the entire  process I would be feeling like Time Warner cared about me and was working hard to solve my problem. This was about me. Unfortunately, given how they handled the situation, my perception couldn’t be far from that.

We are all doomed, unless there is a new player

It’s sad to say but I’m skeptical that Time Warner can change how they handle customer service. Unless you put the customer first since the beginning, this is something that is really hard to change decades down the road. And, to be fair, Time Warner is not alone at sucking at Customer Service. This is a common thing among Telecom companies. Check the reply I got back from AT&T after I mentioned them on my original tweet. 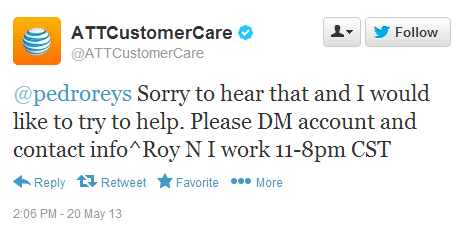 Yes, they apologized  as if the mistake was theirs. If you think Customer Service reps don’t listen to you on the phone, they don’t even read a 140 character message. The only way I see us out of this mess is if a new disruptive player gets into this market.